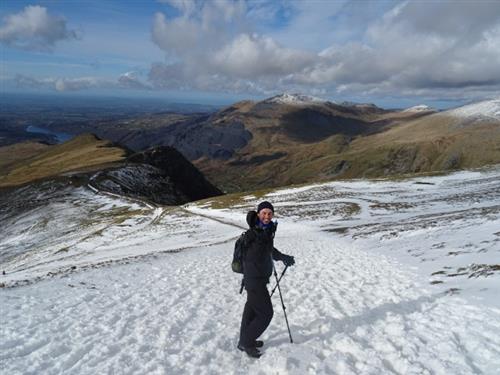 bi Design Director Smashes Fundraising Target and Completes The Three Peaks Challenge On Foot and Bicycle Local businessman Darryn Buttrill, owner and founding director of bi Design Architecture in Repton, has completed the Three Peaks the hard way during 5 days of extreme endurance and extreme weather over the Easter weekend. A target of £2,000 for the Multiple Sclerosis Society was smashed with over £4,500 raised with more donations still coming in.

bi Design is an award winning architectural practice based in Repton, Derbyshire. The practice owner and founding Director, Darryn Buttrill, was dismayed when a friend in his 30’s was diagnosed with Multiple Sclerosis (MS). Together with four other friends Darryn decided to make a difference and made a commitment to raise money and raise awareness of this debilitating disease affecting around 100,000 people in the UK most of whom are diagnosed when they are between the ages of 20 and 40.

Over 5 days of the Easter Weekend the five friends set out to climb the three peaks and cycle between Ben Nevis, Scafell Pike and Snowdon. The endeavour was tough enough but then Storm Katie arrived. Day 1 the friends climbed Ben Nevis. Setting out at 6am they encountered 40 to 60mph winds as their neared the top. It was raining hard, there was snow on the ground and the path was being repaired so they found themselves climbing over piles of rocks that had been airlifted to the mountain making the ascent even more difficult. They climbed to 800m and in the midst of a blizzard made the decision that it was too dangerous to continue to the summit. Disappointed but undeterred they pressed on and cycled through Glen Coe to half way down Loch Lomond.

Day 2 saw the friends cycle over 120 miles to Carlisle “My left knee was giving me some trouble which was very worrying as this was only the second day.” Said Darryn Buttrill, “But I taped it up and we cycled to Carlisle with a headwind against us gusting between 25 and 30mph which made it feel like riding up-hill the whole day, but at least it had stopped raining!”

On day 3 the friends made it to the summit of Scafell Pike in near hurricane conditions owing to Storm Katie and Darryn was literally blown over by the wind. “The conditions were truly horrendous. It was raining, there was snow at the top and from abut 600m onwards we were in cloud. We were picking our way up from kern to kern, we could hardly see. When we got to the very top we huddled together behind the summit kern to shelter from the wind, took a quick photo and made the decent as quickly as we could.” Said Darryn. The plan for the rest of the day was to cycle from Scafell to just outside Lancaster but owing to 50 to 60mph gusts on the road they decided it was too dangerous. Visibility was very poor and a cyclist could easily be blown into the path of a vehicle in those conditions.

Day 4 saw the friends cycle 86 miles to Rhuddlan Castle. There were strong headwinds all the way but it was not as wet as the previous days and the friends began the final day, Day 5, with a 41 mile cycle ride from Rhuddlan to Llanberis in the freezing cold and rain. They reached the snow laden summit of Snowdon mid-afternoon, when the cloud lifted and the sun came out as they made their way to the finish and the conclusion of their strenuous charity challenge. Upon reaching the car park they had a wonderful surprise. Their friend that had been diagnosed with MS was there to meet them with his family and a homemade banner made by his mum.

“I knew what we set out to do would be a physical and a mental challenge but we planned it that way because it had to be worthwhile doing. I found I got to a point when to keep going was a mental rather than physical test, and at times I did say to myself ‘if it takes all day and into the night, I am going to do this’. Being with friends was vital because when one of us was flagging the others would buoy you up and we were all determined to complete the challenge for our friend, for the Multiple Sclerosis Society and for all the people who had supported us and made donations.”

If you would like to donate please visit our Just Giving page www.justgiving.com/Dave-Hawkes2